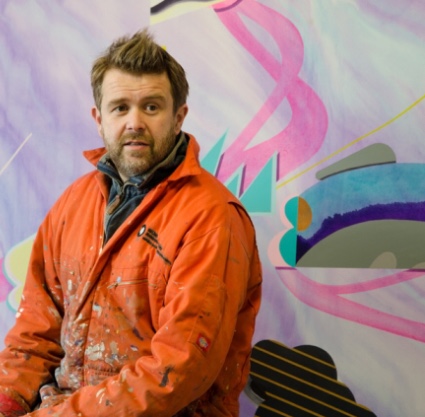 As part of the WHERE WHAT exhibition Prof. Danny Rolph, exhibition curator and founder of the Sedici group, will be discussing professional practice and survival tactics in the art world. We do hope you can join us for this and Admission is Free.

Born in London in 1967, Danny Rolph has been a professional artist for 24 years and has gained international acclaim exhibiting all over the world. After completing his degree in Fine Art at the Winchester School of Art he went on to achieve an MA in Painting at the Royal College of Art. Since 2009 he has been a professor of Fine Art at Bucks News University and has taught at various other post-graduate institutions including the Royal Academy Schools and Royal College of Art. He is currently represented by 532gallery Thomas Jaeckel (NYC) and Barbara Davis Gallery (Houston). His work is held in many important private collections including Facebook HQ, Speyer Tishmann, Goldman Sachs, Duke and Duchess of Westminster as well as The Metropolitan Museum NYC and The Tate Gallery London.

Rolph has been nominated for the Sovereign European Art Prize and Hamlyn Award and has received numerous prizes including the John Minton Travel Award, a Delfina Trust Award and the London Visual Arts Award. He was also appointed Scholar at the British School at Rome. He lives and works in London.